GOD IN TALKS WITH PLASTIC INVENTOR 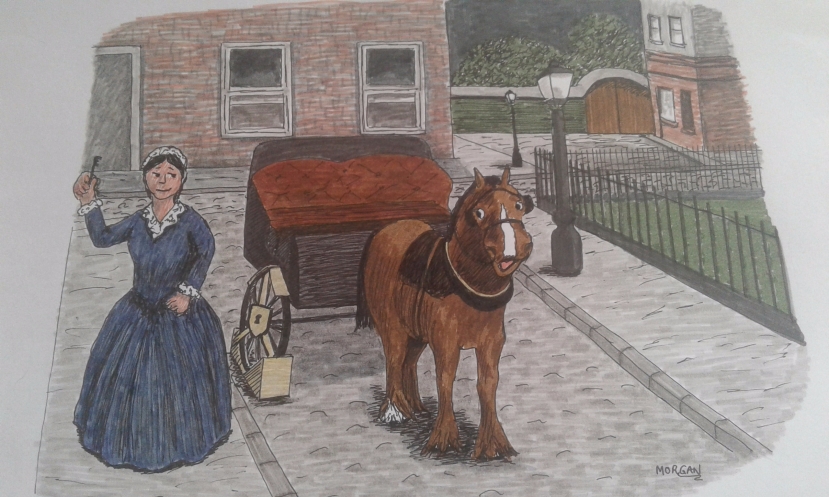 Further details regarding what life would be like had Florence Nightingale become a wheel clamper instead of a nurse andvsocial reformer were released earlier today at the History Maintenance Commission HQ, NYC.

The HMC are speculating that God would have instead called upon the inventor of plastic, Alexander Parkes (creator of Parkesine, the first man-made plastic) to do good works for him.

‘Florence Nightingale received calls from God in 1837 and 1850,’ HMC spokesperson Mortimore Hackpot explained, ‘miraculous in itself as Alexander Graham-Bell didn’t invent the telephone until 1875. But it stands to reason that if Miss Nightingale choses the path of vehicle clamping and impoundment instead of what we presently know her for, her health reforms and introducing modern nursing, God is unlikely to want to communicate with her….unless he wanted to set up pay and display ticketing operations on land adjacent to all his churches.’

The theory then propagated by the HMC, via the Omphalos programme, is that God would then have asked someone else to do good works for him, and that person, a contemporary of Nightingale would have been Alexander Parkes.

In the report released by the HMC it is theorized that in September, 1851, the church at All Saints in Luton, Bedfordshire, England, would be stolen, or rather its lead roof left and the rest of it stolen (the thief being new to the ways of sin and having not quite got the hang of it).

The Bedfordshire Bugle takes up the story:

‘I hope the miscreant responsible sees our congregation open to the elements and it weighs heavy on his mind,’ said All Saints vicar The Reverend Nicholas Quigley. Although sceptics were quick to point out that the combination of stone and masonry that the thief alighted with is bound to have weighed far heavier.

‘There have been sightings of the sinner amongst our flock,’ The Reverend Quigley continued, ‘he’s been going around Luton door to door trying to sell householders stained glass windows.’

Over the following weeks The Bedfordshire Bugle provided updates on the story:

Quotes have been obtained from stonemasons regarding the cost for a replacement church at All Saints, the cheapest provided being from Guppy & Sons Bespoke Cathedral, Church and Lean-To Builders at a whacking £9,800. A good £9,350 more than the emergency church replacement fund has thus far collected.

‘However,’ All Saints vicar Reverend Nicholas Quigley revealed, ‘There has been a fascinating quote of just seventeen pounds, two and six from Alexander Parkes who insists that his new invention of Parkesine will not only be much cheaper but much more resilient than traditional stone.’

It’s been a whole year since All Saints Church in Luton was rebuilt completely in a new man-made material called Parkesine aka Plastic.

‘We are all called “plastics” by followers of other faiths and denominations,’ said Mrs Diane Roberts, a devout member of the All Saints congregation, ‘but we don’t care. We have the most talked about church in the land.’

‘The acoustics aren’t as impressive as in a traditional stone building,’ declared choirmaster Mr Charles Visconte. ‘And my wife on the keyboards gets funny looks and sniggers whenever she says that she loves playing with her plastic organ, but we thank the good Lord and his representative on Earth, Alexander Parkes, for the gift of this magnificent building.’

Parkes is hoping the successful adoption of a plastic church by the community of Bushmead, Luton will lead to others following suit and he’s swift to emphasise the advantages of plastic churches over those traditionally built of stone.

‘The bell, being made of plastic, is more pleasant on the ears,’ he explained. ‘Quasimodo would never have suffered from his hearing problems if Notre Dame had had one fitted. Furthermore, as the gravestones are now made of plastic they are totally weatherproof unlike their stone alternatives that start deteriorating the moment they’re placed outside and eventually wither and crumble. My plastic gravestones last forever which means that for the first time a full death’s time guarantee can be included with each purchase.

The concluding words must go to the All Saints vicar Reverend Nicholas Quigley who took the bold risk to order a plastic church to replace the one that was stolen last year.

‘It has far exceeded my expectations. We have done away with the collection box now as we only accept plastic. It is also reassuring to know that if God ever sought to punish mankind again with floods of biblical proportions, everyone will make a dash to our church here in humble Bushmead because it’s the only one in the world that will float.’

This site uses Akismet to reduce spam. Learn how your comment data is processed.

All Copyright Jonty Morgan 2020 Unauthorized use and/or duplication of this material without express and written permission from this blog's author and/or owner is strictly prohibited. Excerpts and links may be used, provided that full and clear credit is given to Jonty Morgan and with appropriate and specific direction to the original content.